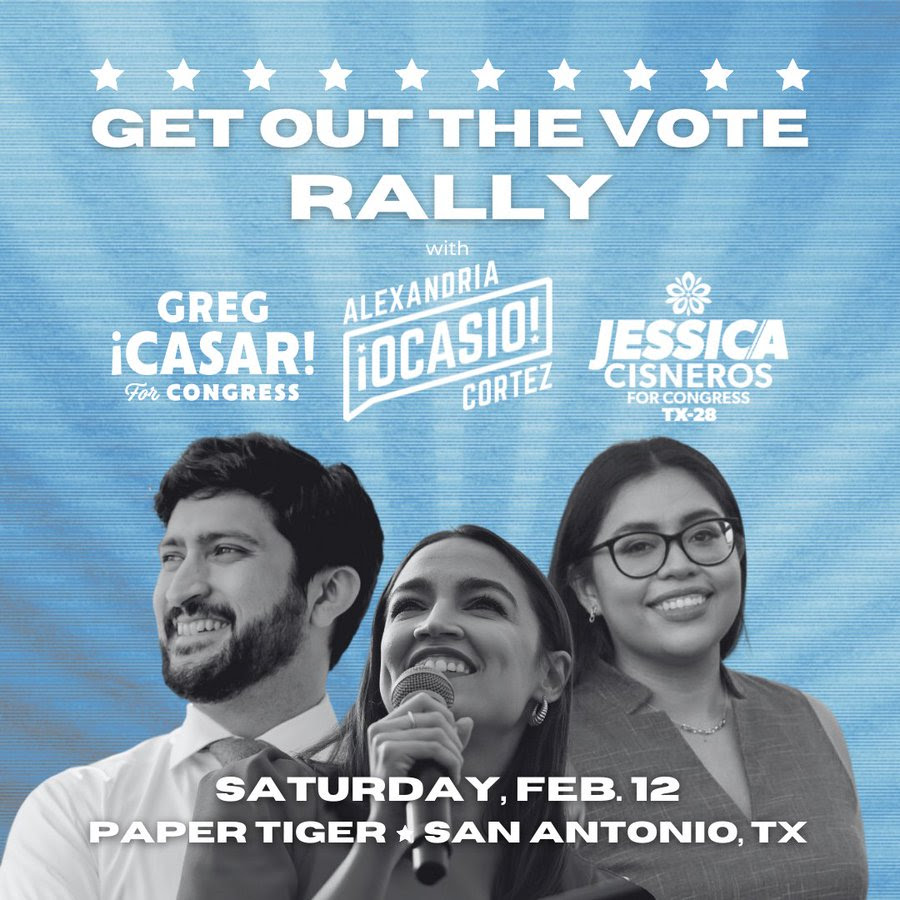 Cuellar opposes open borders. It is a rematch of a 2020 primary, which he barely won. He had a 19-point win in the general over Republican Sandra Whitten.

Political Insider reported, “The second time may just be the charm for Cisneros. Progressive Democrats surely have seized on the fact that Cuellar has some issues of his own, including being under investigation for ‘alleged improper ties to Azerbaijan.'”

AOC also is supporting Greg Casar in an open-seat primary to succeed Democrat Congressman Lloyd Doggett, a victim of redistricting who will run in another district.

The Cuellar-Cisneros battle is the main event. AOC’s rally on Saturday already is sold out as she tries to become the Democrat Trump.

Two years ago, Mother Jones reported, “Jessica Cisneros Could Be the Next AOC. (But Don’t Tell Her That.) This 26-year-old Texan hopes to unseat ‘Trump’s favorite Democrat.'”

The story said, “Laredo is a long way from the Bronx. Cisneros and the eight-term incumbent she’s running against have radically divergent ideas about the electorate and what kind of ideas will play in a large rural border district. Cuellar, in whose DC office Cisneros once interned, has a lifetime A rating from the National Rifle Association, opposes abortion rights, and has voted with President Donald Trump more often than any other Democrat in Congress. You might expect a record like that—in a district similar to this one—to doom the incumbent. Cuellar is running on it.

“There’s a lot riding on how well Cisneros does. If the kinds of policies she’s pushing, like the Green New Deal and Medicare for All, are going to take hold in the Democratic Party, they’re going to have to catch on in places like South Texas. Either you figure out how to sell universal health care to people crossing the border for a mammogram, or your movement withers on the vine. Cisneros’ success or failure will rest heavily on a question that a lot of Democrats are asking: Just how much of a revolution do people want?

“So far, Cisneros has reason for encouragement. When we met, she had just gotten off the phone with emily’s List, which supports pro-choice Democratic women and would eventually endorse her in October. In September, she picked up her first congressional endorsement, from Sen. Elizabeth Warren (Mass.), and introduced the presidential candidate in front of 5,000 people at a rally in Austin. Not long after that, Ocasio-Cortez herself offered a stamp of approval, telling HuffPost, ‘I want to be the shortest-lived youngest congresswoman ever.'”

Funny how Medicaid for All and the Green New Deal just vanished after the 2020 election. Democrats dropped it right after the election, just like they are dropping mask and vax mandates now — and for the same reason. The public does not want them.

There is a wildcard in this year’s Cuellar-Cisneros rematch. Community organizer Tannya Benavides. It will be interesting to see whose votes she siphons.

Meanwhile, Republicans marked Cuellar’s seat as one of five districts in Texas it wants to flip.

Here is hoping there are plenty of hard feelings among Democrats after the primary.

But AOC is onto something. Primary the people in your party that you cannot count on.