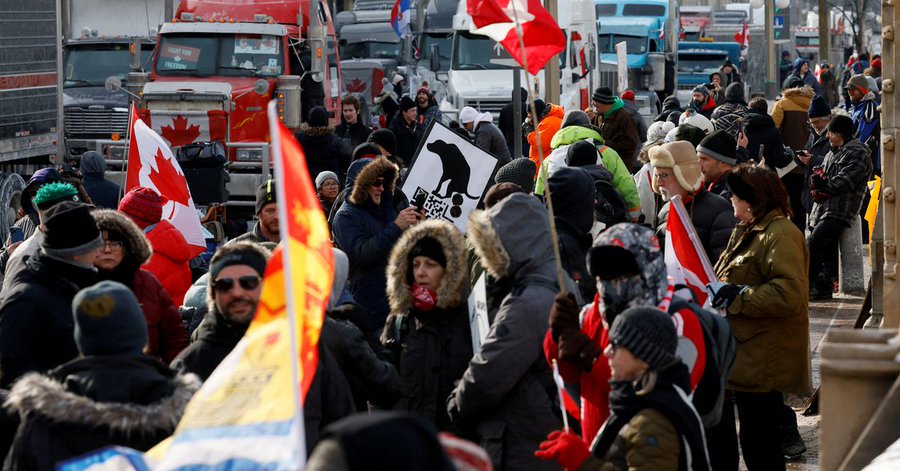 50,000. That’s the latest count of how many rigs are in Ottawa today as the protest ends it first workweek.The drivers are paying a price for their freedom and ours. Driving as far as halfway across the continent to get to Ottawa costs money. And while they are in Ottawa, they are not making money by hauling cargo.

But the battle against an unconstitutional mandate for a vaccine with limited benefits is well worth the price they pay.

Their protest does not have the Media Housekeeping Seal of Approval. The media called BLM riots that tore up city after city mostly peaceful protests. But this grassroots struggle against the tyranny of the technocracy gets only grudging coverage and then it is all negative.

Corporate America gave tens of millions of dollars to BLM and one of its co-founders bought four mansions.

Legal Insurrection reported that the company is holding up the distribution of the money. The official line is, “This fundraiser is currently paused and under review to ensure it complies with our terms of service and applicable laws and regulations. Our team is working 24/7 and doing all we can to protect both organizers and donors. Thank you for your patience.”

The reality is GoFundMe sees the movement as conservative.

But if the Canadian truck drivers were not having an impact, the fascists would not fear them. Justin Castreau, excuse me, Trudeau would not have fled Canada’s capital ahead of the convoy.

Glenn Harlan Reynolds observed, “So we’re finally seeing a genuine, bottom-up, working-class revolution. In Canada, and increasingly in the United States, truckers and others are refusing to follow government orders, telling the powerful that, in a popular lefty formulation, if there’s no justice, there’s no peace.

“Naturally, the left hates it.”

I agree, and I can prove it through a column by David Moscrop in the Washington Post.

In it, he wrote, “The convoy speaks of threats to liberty. It would be close to something if the participants weren’t so far off. Threats to liberty are rampant in Canada, but not because of vaccine mandates. Rather, it is income and wealth inequality; worker exploitation; gendered, religious, racialized and other forms of hate violence; ongoing settler colonialism; and other forms of structural marginalization and oppression that compromise liberty.”

The working class largely does not care about income and wealth because they want to have a high income and be wealthy someday. That’s why they work. Donald John Trump has long been a working class hero.

Obama admitted this in a law school paper in 1991. He wrote, “[Americans have] a continuing normative commitment to the ideals of individual freedom and mobility, values that extend far beyond the issue of race in the American mind. The depth of this commitment may be summarily dismissed as the unfounded optimism of the average American—I may not be Donald Trump now, but just you wait; if I don’t make it, my children will.”

Obama was such a liar even then.

Through most of 2020 and all of 2021, I waited patiently for an uprising against unnecessary and ineffective measures the dopes who run the governments of the world took to stop covid. Finally, the revolt is on.

50,000 truckers in Canada clog the streets of Ottawa. They sing, “We Are The World.

Fact-check: True. They inspire the world in a way an American convoy would not because it would be tainted as American.

Canada is peopled by the most polite population in the world. When they have had enough, tectonic plates re-align. Canada’s truck drivers are saying out loud what half the world is thinking. People listen. And act. Convoys are popping up around the world.

Long haul drivers in the Great White North are saving the world from misguided governments.