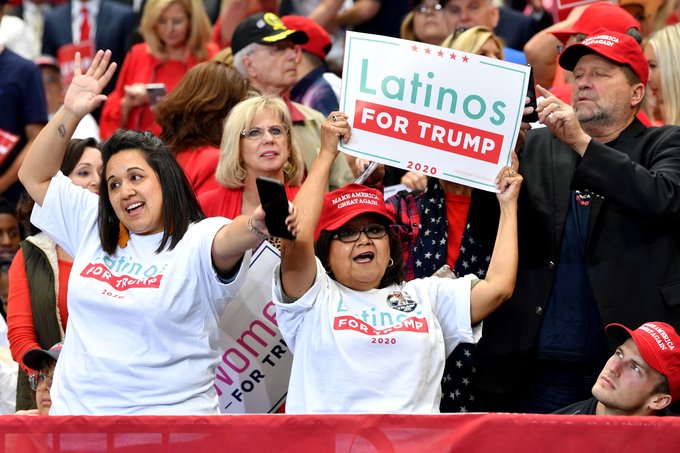 A few powerful Hispanic L.A. council members were caught on tape making what The Atlantic called racist and homophobic remarks about politicians as well as the black son of a white politician. The publication said, “Nury Martinez shows that Latinos’ racism can still reaffirm white supremacy..”

Meanwhile, the Guardian reported, “Conservative Muslims join forces with Christian right on Michigan book bans.” No one is banning books. They want to taking Gender Queer, a book with graphic depictions of underage sex from elementary school libraries.

The two stories show a crumbling of the Democrat coalition of liberal white Karens, blacks, Hispanics, Muslims and LGBT.

The Democrat plan was simple. Isolate the Republicans as a party of klansmen and hold a majority forever once non-whites outnumber whites sometime in 2040 or 2050. Liberals and other supporters of Big Government have accepted this as inevitable.

The Niskanen Center asked in 2019, “When will Republicans face demographic reality?”

The story said, “Matt A. Barreto and Angela Gutierrez, in the first of these papers, point out that California has been a majority-minority state since the 2000 census, and in 2014 Hispanics surpassed whites to become the largest racial group in the state. If the rest of the country follows California’s political-demographic trajectory, the future will be dire indeed for the Republican Party.”

If so, will the country follow the lead of the Latino council president who had to resign because of remarks made in private? The Atlantic says she is now a white supremacist.

How many others now labelled Latino/Hispanic — (whatever happened to Chicano?) — will become white? George Zimmerman is half-Hispanic as is Republican Congressman Alex Mooney of West Virginia. Do we consider Lucille Ball’s son and daughter to be white or Hispanic?

Then there are Muslims. Are they white or black? I don’t know. I do know that Muslims had a falling out with the LGBT crowd, which is a major donor to Democrats.

The Guardian reported, “In Dearborn, a city that’s 47% Arab American and reliably Democrat at the polls, some conservative Muslim residents have joined forces with the Christian right to censor literature in the city’s public schools.

“Although the right wing in America has frequently vilified Muslims and Islam, the alliance highlights how some deeply socially conservative Arab Americans are willing to put that aside and join in the culture wars. Several parents who spoke with the Guardian insisted the effort had nothing to do with politics and did not answer questions about why they would campaign alongside Donald Trump supporters.”

Speaking of Arab Americans, Democrat Nick Rahall represented West Virginia in Congress for 38 years. You know, for a 95% white state, West Virginia sure elects people to Congress whom the media considers non-white.

But whites include Hispanics and Arab Americans. Hispanics is a label for people whose ancestors arrived from 21 different nations and Puerto Rico. One size does not fit all be it politics or pantyhose. The producers of Chico and the Man learned that when California Hispanics complained that Chico and the Man was from Puerto Rico, not Mexico.

Descendants of Cubans are largely Republicans while Puerto Ricans are reliably Democrat. Those whose ancestors came from Mexico are split. In California, they vote Democrat. Elsewhere, not.

Politico pointed out, “Trump Didn’t Win the Latino Vote in Texas. He Won the Tejano Vote.”

This summer, Texans elected the first congresswoman who was born in Mexico. She’s a Republican.

Overall, 33% of Hispanics would vote for Trump; 52% for Biden, according to the New York Times.

That cuts the Democrat advantage from 34 points in 2020 to 19 points in just two years.

America is a melting pot, not a salad. Democrats do not want their voters melting — assimilating — into the American culture because that culture is Republican. The Democrat culture is turning boys into girls into boys to appease the LGBT crowd that is so important to campaign funding. That’s just one of the turnoffs for Americans. Bidenomics is another.

John “Hannibal” Smith used to say on The A-Team, I love it when a plan comes together.

I love it when a plan falls apart.