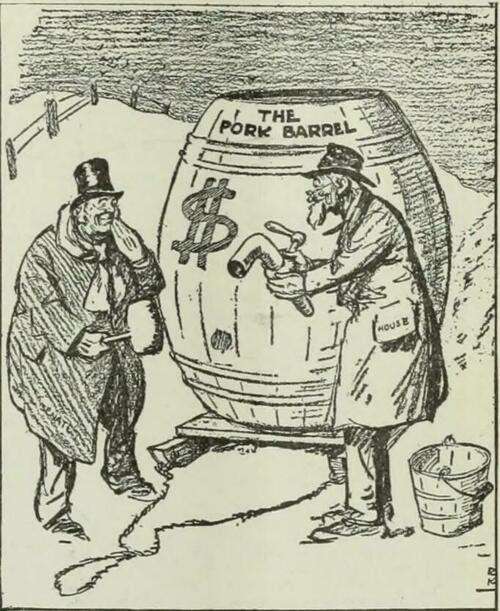 This may cost me a few readers but facts are facts. I try not to lead readers astray.So bear with me on this one.

The Hill reported, “After an 11-year drought, congressional earmarks are back with vengeance.

“The $1.5 trillion, 2,741-page omnibus spending package is loaded with funding for lawmaker pet projects, some of which could help incumbents in this fall’s elections.

“The legislation includes more than 4,000 earmarks, according to a list of projects provided to The Hill by a Senate Republican aide that spanned 367 pages.”

The total price of those earmarks was not included in this story. Schumer got 59 earmarks totaling $80 million. Sounds like a lot but if that were the going rate for earmarks, the total price would be $5.5 billion or so.

Pork barrel politicking is not the problem. In the 11 years since Congress banned earmarks, the national debt doubled to nearly $30 trillion, It rose from 95% of our GDP to 124%.

Earmarks aren’t the problem. Wars and welfare are.

Let me go over that again.

In the past 11 years, we spent ZERO on earmarks and doubled the deficit. A debt that took us 222 years to accumulate we doubled in just 11 years without congressmen bringing home the bacon.

Critics are blaming a unicorn for the horse manure. Earmarks are to the national debt what climate change is to the weather.

But many fine people fall into this trap of blaming earmarks. Jonathan Turley, for example, wrote, “While Congress disavowed earmarks, the pork-ridden bill shows that both parties have abandoned the pledge.  Spending trillions in the last couple years appears to have removed any sense of fiscal responsibility or accountability. We are now over $30 trillion in debt so what are a few pork items — or in Schumer’s case 142 such items. (Some argue that debt is really only $22 trillion and that debt does not matter).

“It was a clever move at a perfect time. With Ukraine raging and people traumatized over the war, leadership like Speaker Nancy Pelosi (D., Cal.) kept bringing questions back to $14 billion in aid for Ukraine. Members stressed that there was no time to waste — or in this case to read — before voting.

“It is a familiar tactic on pork spending. You can hide an entire drove of pigs behind a single redeeming budget item.”

Ukraine and earmarks combined are about 1% of the federal budget next year.

The other 99% of the budget are the problem. Medicaid is about 30% of that $1.5 trillion. (The feds will pay two-thirds of the $660 billion Medicaid will spend.)

Not only does Medicaid bust the federal budget, but state budgets as well as legislatures struggle to meet co-payments.

The medical industry is the best lobbying group in America. Poor people will die if we don’t throw in a 10% hike this year in Medicaid spending. The money goes to the medical bureaucracy which has mushroomed under Medicaid.

The military budget is about half that $1.5 trillion. The money now includes a lot of wokeness as Silly Milley ponders white rage. Teacher says every time you fire a million-dollar missile, a retired general gets a commission.

[Update: The $1.5 trillion is in addition to more than $2 trillion in what is deemed nondiscretionary spending. Spending on defense, Medicaid, Medicare and the like are on automatic pilot. That’s what drives this crazy overspending.]

I go against the grain on earmarks. If we are going to give Ukraine $13.6 billion because Zelensky and Putin are in a pissing match, then why not give (scans The Hill story again) “Dunkirk Harbor on Lake Erie, $5 million more than the $680,000 requested by the administration.”

That $1.5 trillion budget next year is on top of the $1.2 trillion bipartisan infrastructure bill and the $1.9 trillion American Rescue Plan. That’s $4.6 trillion in spending — which is nearly a million times the size of that pork barrel in Dunkirk Harbor.

The media does not do the math.

$41 million is one-tenth of 1% of 1% of that $3.5 trillion in spending that he stopped. The Hill compared a spitball to a hurricane.

The Hill should be ashamed.

But bashing earmarks is budgetary virtue signaling. I said it. Someone has to. I try not to lead readers astray