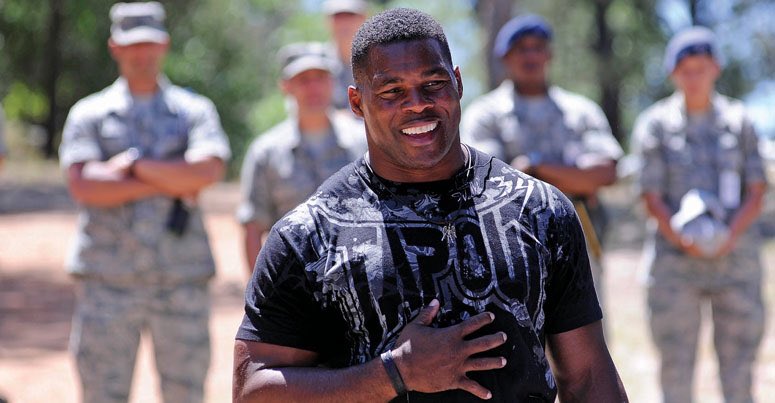 So Amanda Carpenter at the Bulwark (she also is a CNN contributor) is miffed because Senate candidate Herschel Walker won’t meet the press.She wrote, “Short of some unforeseen implosion, Herschel Walker is going to handily win the Republican primary for the U.S. Senate seat from Georgia now held by Raphael Warnock. And Walker will do it by running the easiest campaign ever.

“Debates? Skip ’em. Sit down with reporters and be grilled on policy? Nah. See, Herschel Walker doesn’t make campaign stops so much as he makes appearances, speaks to fans, and poses for photos.

“Welcome to the life of a celebrity candidate.”

Yep. Conservatives are ignoring the press because they no longer want to be punching bags.

Carpenter has the sadz.

She wrote, “The playbook isn’t hard to read.

“Walker’s introductory campaign video, released last August, is titled ‘Run.’ In it, he speaks to the camera with his high-school locker room behind him. We see present-day Walker sprinting on the track, with cuts to his old sports footage. A church flashes on the screen as he mentions his faith in God. Then he’s doing mountain climbers and sit-ups in a weight room. He jumps rope and strengthens his arms and abs. We see a yellowed scrapbook of his news clippings. This is designed to show us that Walker knows how to work hard and that he never quits.

“Then the tone changes. Walker says: ‘I’m a conservative because I believe in smaller government, a strong military, personal responsibility, and making sure all people have the opportunity to pursue their dreams. That’s an America worth fighting for.’ Then, it’s back to football. An announcer is heard, ‘Herschel Walker at the 45, he’s gone!’ to roaring cheers. Walker then appears back on the football field, with a stadium light over his shoulder: ‘My name is Herschel Walker, and I’m running for the United States Senate.

After the 2020 election, Walker is running the way anyone who wants to win would because taking questions from the press is idiocy because the press hates conservatives.

As president, Donald John Trump gave the press ample access. Not only did he do Fox interviews, but he gave NYT and other hostile outlets plenty of his time.

He often would do impromptu press conferences before boarding Marine One, the presidential helicopter. He would stand in the driveway and take questions for 10, 15 and even 25 minutes.

How did the press show its gratitude?

By badgering him about not holding a formal press conference. By calling him a liar when he told the truth. By aiding and abetting Obama’s use of the FBI to spy on him.

Meanwhile, Biden spent his days in Delaware running a Warren Harding-style campaign. Biden occasionally popped out of his hole to look at his shadow and eat an ice cream cone.