Houses of the unholy

All errors should be reported to DonSurber@gmail.comMonday, April 18, 2022

Houses of the unholy 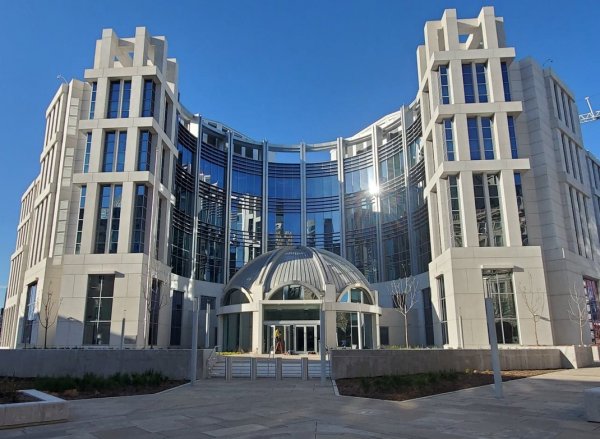 Charles Glasser posted this photo at Instapundit.He wrote, “Here’s a picture of the new Sen. Fred Thompson Courthouse in the Middle District of Tennessee. My architect brother Laurance did the design consulting with architect Michael Graves and was the Advisor of Design and Construction for GSA and the Administrative Office of the US Courts.

“In short, he made it all happen, and I couldn’t be more proud.

It looks like a fine building and all. But it is yet another cathedral to the federal government, where if you go inside to protest, they will call it an insurrection and lock you in jail indefinitely.

AP reported on the groundbreaking in 2018.

It said, “Lamar Alexander said Thompson will have gone from prosecuting bank robbers and moonshiners from a back office in a federal courthouse to having his name on the front of one.”

Moonshining is the crime of not paying the feds a tax on whiskey. It is perhaps the oldest federal crime, having triggered the Whiskey Rebellion in 1794. Eliot Ness went to Chicago not to stop gang warfare and murder, but to collect taxes from Al Capone. Ness worked for the Department of Treasury. Capone eventually did go to prison for failing to pay his taxes.

Ness’s rival, the FBI, did not fight crime. Instead, J. Edgar Hoover compiled dossiers on every politician, celebrity and protester in the land. Hoover tried to blackmail Martin Luther King into killing himself.

You can read the letter for yourself.

A decade later, Nixon passed over Hoover’s hand-picked successor, Mark Felt. He exacted his revenge with Watergate. In 2 years, Democrats brought down the first man to carry 49 states on the way to re-election.

From Abscam to that fednapping in Michigan, the FBI has entrapped many a man. In the words of Marion Berry, once Washington’s mayor for life, “Bitch set me up.” I was so glad when the jury acquitted him. He went to that hotel for one thing and it wasn’t cocaine.

The gawdy new courthouse is a sad reminder that Lincoln’s government of the people, by the people, for the people, is perishing from the earth. These cathedrals are the government’s way of rubbing its power in the faces of Americans.

Laurance Glasser should be proud of his work on the Fred Thompson Courthouse in Nashville. He is a modern Cass Gilbert, whose designed many a state Capitol, his masterpiece being the gilded domed one in Charleston, West Virginia.

But they are houses of worship to the government. Most state legislators travel to their state capitals not to rein in the government but to have it solve more and more problems.

They call them public buildings but they no longer are. The public can no longer walk right into West Virginia’s Capitol. Terrorism is cited. I expect razor fencing and walls soon. Only the privileged few may enter.

The buildings are ornate with no expenses spared. Just like the governments they house.

Judges are so powerful that when the Senate confirms one, white smoke should rise from the chimney of the Capitol.

Perhaps we should turn these cathedrals over to the churches and send legislators to the factories and Kmarts their actions have closed over the past half-century. Surely there is a closed or failing mall in Nashville that could have been bought and converted into Fred’s courthouse for half the price. A judge working from a cubicle may be humble enough to admit that January 6 was not an insurrection and release the dissidents.

A man can dream.