It is no longer OK to call a president Hitler

It is no longer OK to call a president Hitler 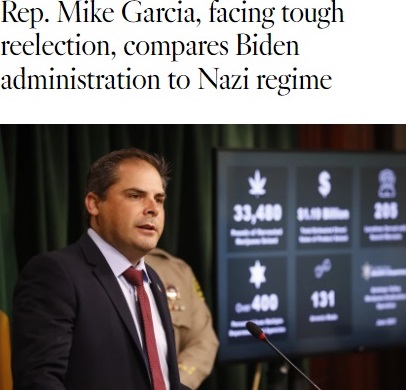 Garcia said, “This is literally tyranny of a majority right now that is acting more like a Third Reich than they are the United States. And this is very dangerous.”

The shocked newspaper said, “References to Nazi Germany have emerged as a popular rhetorical flourish for Trump’s most stalwart backers. But unlike those safely ensconced in a deep red district, Garcia is locked in a hotly contested reelection battle for his northern Los Angeles County district that will hinge on his ability to win over independents and Democrats, not just the GOP base.”

“Other GOP politicians denounced the actions by the Department of Justice as those of a banana republic or other oppressive regime.”

Of course the newspaper had no problem using the Nazi-Hitler-Third Reich rhetoric on President Donald John Trump. I will explain why later.

The newspaper published a column by Max Boot on October 17, 2016 — just before the election — “The Nazi echoes in Trump’s tweets.”

The tweet in question said, “Animals representing Hillary Clinton and Dems in North Carolina just firebombed our office in Orange County because we are winning.”

Boot went on to fact-check Trump, saying he was down in the polls by 2.9 points in North Carolina.

Boot ended his column, “He is going to some very dark places where no previous presidential nominee has ever gone.”

We discovered Obama went to darker places by using the FBI to spy on Trump.

But I am getting sidetracked. The point is, the LA Times was cool with making Trump out as an authoritarian.

But Biden is. He approved of the raid. Merrick Garland, his wingman attorney general, took the heat for it but make no mistake, addle-brained or not, Biden calls the shots. A year ago, he ignored his generals and withdrew from Afghanistan in a helter-skelter manner that left thousands of Americans and $83 billion in military equipment behind.

The LA Times is run by cowardly bullies.

None dared call Hitler out then because they feared him. Instead, the newspapers and industrialists collaborated with him.

None dare call Biden out now for the same reason.