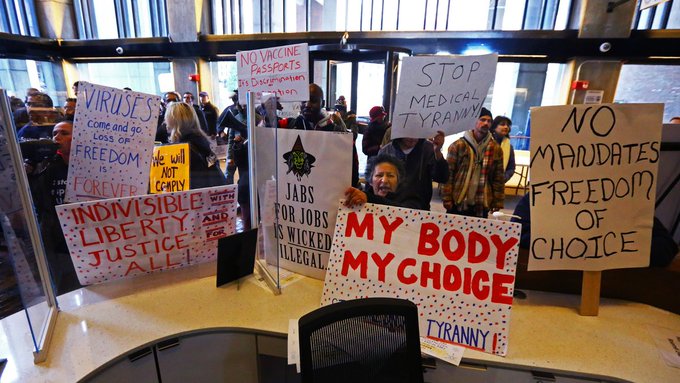 Judge Steven Douglas Merryday shot down Biden’s vax mandate for federal contractors in Florida. He issued an injunction preventing its enforcement. The battle is between the federal and state government over who has the authority to handle a public health emergency.In his injunction, Merryday questioned the premise on which Biden based this particular mandate.

He wrote, “Announcing the task force’s guidance as promoting ‘economy and efficiency’ in procurement, OMB’s second notice of determination at 86 FR 63418 states that the vaccination requirement and other safety measures ‘will decrease worker absence, reduce labor costs, and improve the efficiency of contractors and subcontractors performing work for the Federal Government.’ covid-19, however, appeared in the United States almost two years ago, but OMB fails in the second notice to identify any instance in which absenteeism attributable to covid-19 among contractor employees resulted in delayed procurement or increased costs also attributable to covid-19.”

The Biden administration said it would decrease absenteeism without offering proof of rampant absenteeism.

The judge then said, “Although an executive order might enjoy flexibility to combat a predicted  disruption in procurement, the anticipation of which was based on history, experience, and other fact-based reasons, the absence in the record of evidence suggesting that in the last two years contractor absenteeism has impeded federal contracting both discredits OMB’s second notice and suggests a ruse, a mere contrivance, superficially attempting to justify a sweeping, invasive, and unprecedented public health requirement imposed unilaterally by President Biden.”

An excuse to expand his power.

An imperial encroachment on the privacy of employees and contractors, as well as the sovereignty of Florida, which decided against panicking in the pandemic and has a lower death rate than New York and other states that have taken draconian measures to try to stop a virus.

I am vaccinated and likely will get a booster next month. My decision. I don’t have to explain my decision to anyone I am not married to.

The same applies to everyone else.

Your medical decision is just that: yours.

Bush 41 nominated a good man when he nominated Merryday in 1991. A Democrat Senate confirmed him. That was 30 years ago when Biden wasn’t playing hardball and Democrats weren’t as nuts.