Musk vs. Bezos (aka Batman vs. Lex Luthor)

Musk vs. Bezos (aka Batman vs. Lex Luthor) 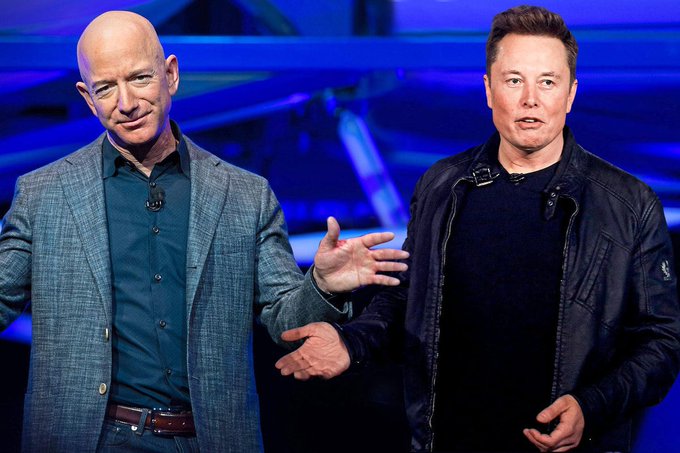 Under the enemy of mine enemy is my friend rule, I suppose I can call Elon Musk a friend. A tertiary one as Sheldon Cooper refers to Howard Wolowitz on the Big Bang Theory show.Musk’s purchase of enough Twitter stock to warrant a seat on its board of directors has given conservatives and other Real Americans hope that free speech will return to the public square.

To be certain, Musk set his fellow billionaires atwitter. They own propaganda media outlets and fear he will return Twitter to its old self which was used by Real Americans to get around their Pravdas.

Mini Mike Bloomberg had one of his hacks churn out a column saying it is bad for free speech to have a billionaire invest in the media.

The irony was squared when Bezos ran it in his Washington Post.

The billionaire Bezos threw in a second cognitive dissonant column in absolutely free!

It was written by Ellen K. Pao. Who? The Post said, “Pao is a tech investor and advocate, the former CEO of Reddit, and a cofounder and CEO of the diversity and inclusion nonprofit Project Include.

Ah yes, Reddit, which banned Reddit_The_Donald because it supported President Trump. My guess is her Project Include excludes Real Americans.

She wrote, “It takes a lot of money to become a board member of Twitter, but not a lot else apparently. With a large stock purchase, an abuser of the service — Elon Musk, the CEO of Tesla and the world’s richest man — has now essentially bought himself a warm welcome from Twitter CEO Parag Agrawal. For those of us who care about equity and accountability, Musk’s appointment to such a prominent role at a platform that serves hundreds of millions of users daily is highly disconcerting — a slap in the face, even.”

Mind you, Pao is an investor. Surely she knows that if you invest enough money in a public company you indeed have the power to appoint at least one director.

Her complaint is “Musk has been open about his preference that Twitter do less to restrict speech that many see as hateful, abusive or dangerous.”

Her complaint is nonsense. Twitter did nothing to stop the Russian Collusion lie that led to the attempted coup de Mueller nor has it stopped pro-war propaganda.

And her complaint is Bezos’s complaint because he published her piece in his newspaper.

Her argument is that as a private company, Twitter does not have to support free speech.

But it is not a private company.

Nevertheless, Pao wrote, “Musk calls himself a ‘free-speech absolutist,’ but like many ‘free speech’ advocates, he willfully ignores that private companies are free to establish some limits on their platforms. He hasn’t learned from the folks who left Facebook and subsequently raised alarms about the harms the platform can cause teenage girls and other users. Or even from Dick Costolo or Evan Williams, former CEOs of Twitter, both of whom eventually realized how pervasive and harmful online harassment is. (‘I wish I could turn back the clock and go back to 2010 and stop abuse on the platform by creating a very specific bar for how to behave on the platform,’ Costolo said in 2017.) Co-founder Williams even went on to build a new company for sharing information, Medium, because he regretted the way Twitter, Facebook and other platforms had turned into free-fire zones. Lots of tech leaders — though not Musk — are turning against ‘free speech’ models that end up letting the loudest, most extreme and hateful voices win, driving others off the platforms.

Pao and the rest of the Internet oligarchs want it two ways. On the one hand, they want to be exempt from libel laws because they are not publishers under Section 230 of the Communications Decency Act: “No provider or user of an interactive computer service shall be treated as the publisher or speaker of any information provided by another information content provider.”

They got that exemption by being advocates of free speech.

On the other hand, Pao and the Internet oligarchs want the privilege of being publishers who decide what content fits their arbitrary community standards.

Freedom from censorship is not confined to the government. Twitter indeed censors people. It is a public company and it really should not censor because it risks losing Section 230 protection, which would cost shareholders money. Twitter officers have a fiduciary responsibility.

But let us not get hung up on Section 230. Let us understand that this is a pissing match between two very smart, very rich and very powerful men.

Bezos represents the deep state whose house organ he owns. In a company town the local paper usually supports the company, which explains the Post’s love of the deep state. Watergate sealed its primacy when it accommodated Mark Felt’s vengeance on Nixon for passing him over as FBI director when Hoover died. Hoover wanted Felt to succeed him.

Pao ends her little suck-up-Bezos diatribe: “Musk’s appointment to Twitter’s board shows that we need regulation of social-media platforms to prevent rich people from controlling our channels of communication. For starters, we need consistent definitions of harassment and of content that violates personal privacy. Most companies, I suspect, would welcome such regulations: They would give executives cover to do things they know should be done but which they are afraid to try, out of fear of political backlash or a revolt by some users. If platforms continue to push for growth at all costs — without such regulations — people will continue to be harmed. The people harmed will disproportionately be those who have been harmed for centuries — women and members of marginalized racial and ethnic groups. The people who benefit from unrestricted amplification of their views will also be the same people who have benefited from that privilege for centuries.”

But notice how she framed her argument. She framed it as free speech benefiting white men while harming “women and members of marginalized racial and ethnic groups.”

Her argument is the lame last resort of the elitist: free speech is sexist and racist.

Who benefits from Pao’s attack on Elon Musk?