Note to Elon Musk: Beware, doll, you’re about to fall.

Elon Musk may be Jack Ma-ed 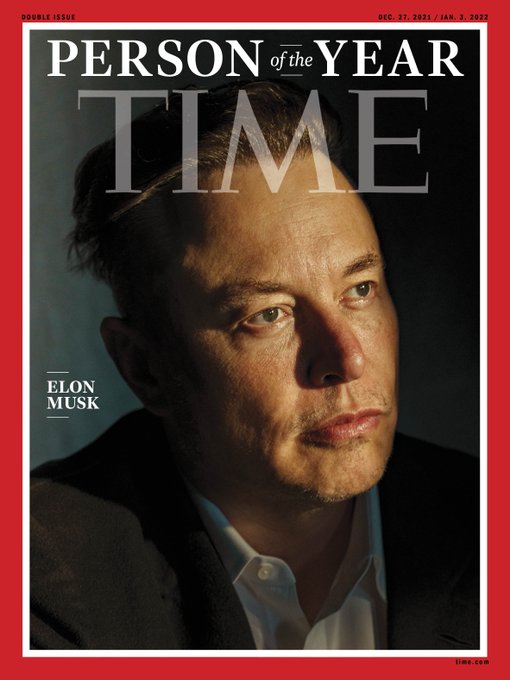 Note to Elon Musk: Beware, doll, you’re about to fall.

And unless you are a musician, you don’t want to be like a Rolling Stone.Time magazine selected Musk as its man of the year. They call it person but I still speak English.

The curse of this award is a bit overstated. Nobody stays up forever. Look at Hitler. Time made him Man of the Year (it still used English then) in 1938.

Seven years later, boom. He put a bullet in his head. As Sinatra sang, “You’re riding high in April, shot down in May.”

But that was by his own hand. Musk’s fate is in the hands of the Deep State.

You see, Musk is Icarus, flying too close to the sun, which in his case is a metaphor for fame. Billionaires around the world know that all their money will not protect them from the government.

The only thing worse to say is that the vaccine does not work (which even I refuse to say).

Fox reported, “Progressives erupt over Elon Musk’s selection as TIME ‘Person of the Year’: ‘What an absolute disgrace.'”

Triggering liberals is easy because they are snowflakes who don’t know if they are a boy or a girl. Without meaning to, liberal J.K. Rowling triggered them by saying only women have periods. She apparently did not get the memo.

But you do not want to tick off the government.

In NPR’s report on Musk’s award, NPR said, “Recently, he has come under fire for hurling a vulgar insult on the platform at Democratic Sen. Ron Wyden, Ore., who supports a so-called billionaires tax. Wyden has been working on legislation that would force billionaires to pay taxes when stocks go up, regardless if they keep or sell the shares.

“In the early days of the COVID-19 pandemic, Musk also spread misinformation to his legions of Twitter followers. He downplayed the threat of the virus, and in 2020, rushed to reopen a Tesla plant in the Bay Area, leading to hundreds of new coronavirus cases.

“In March, the National Labor Relations Board ordered Musk to delete a 2018 anti-union tweet that it says was threatening to labor organizers, and ordered him to re-hire a union advocate who’d been fired.”

Misinformation, which means he is not following the narrative.

NPR fed us Russiagate Bullshit for 3 years. No apology. No correction. No remorse. NPR helped unelect a president and its staff congratulated itself for its undemocratic (yet Democrat) campaign.

These weasels are the propagandists for an authoritarian state that uses the FBI to spy on political opponents, puts protesters in prison without a trial, and censors critics on social media.

He is the richest man in America?

Jack Ma was the richest man in Red China.

Three months ago, I wrote about Jack Ma. I said, ‘George Calhoun of Forbes wrote in June, “Last fall, Jack Ma was rich, and famous, and we knew all about him, followed his every move. He was in fact the richest man in China, and the most famous living Chinese person (according to polls). He was poised to crown his career with a triumphant public offering for his company, The Ant Group, the largest Fintech company in the world. The markets loved him.’

“He was a rock star, even playing guitar on stage at his ‘Amazon of China’ company’s 20th anniversary.

“Ma made two mistakes. The first was becoming the most famous man in China. The second was believing his money made him free.

“Calhoun wrote, ‘Ma last took the public stage on October 24 of last year, in Shanghai. He gave a speech – The Speech, as it will be known – in which he was bluntly critical of the Chinese financial industry establishment. Days later, the authorities responded. They killed the Ant IPO, and summoned Ma to Beijing for regulatory interviews. And the curtain came down.'”

Fame and fortune are nice.

So is not being medicated into a vegetative state.

So is being able to sleep in your own bed at night.

Jeff Bezos knows how the game works. I thought he bought the Washington Post to lobby for his interests. Now I realize that ownership of the mouthpiece for the Deep State protects you from the Deep State.

Elon Musk has no protection. Most people believe Time honored Musk. I see this award as painting a big red target on the man.