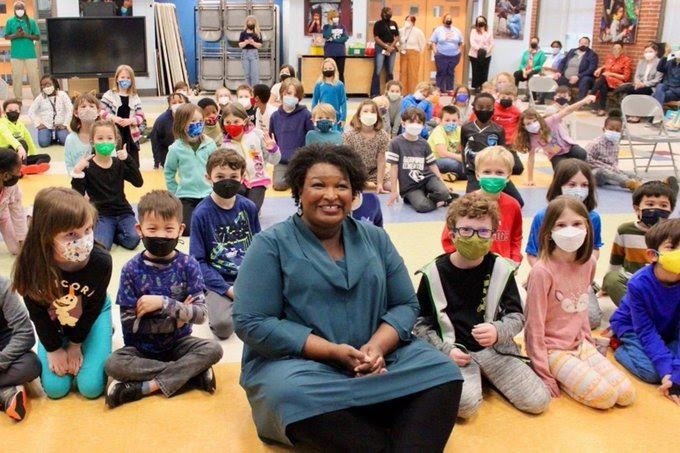 Democrat Stacey Abrams did a photo op at a school in which all the kids and adults wore masks, except her.

People mocked her until she finally deleted the picture she tweeted, as did the school’s principal. Everyone with a lick of sense mocked her. Everyone except Greg Bluestein of the Atlanta Journal-Constitution and other members of the Fourth Estate.Bluestein wrote, “The Abrams’ campaign shot back that it was ‘shameful’ how Republicans used a Black History Month reading event to fuel a ‘pitiful and predictable’ critique.

“Her campaign said she wore a mask to the event and only removed it so she could be heard by students watching remotely and for a handful of photos on the condition that everyone around her was wearing face-coverings.

“Video footage of the event reviewed by The Atlanta Journal-Constitution shows Abrams arrived at the podium wearing a mask, taking it off just before she began to speak.”

But she was not at the podium in the photo. She was on the floor. And she was not speaking. She was posing for a campaign picture.

She is running against Republican Governor Brian Kemp.

In reporting on her masklessness, news organizations used the P word. Pounce.

CNN reported, Among the political opponents who seized the opportunity to pounce was Kemp, who wrote in a tweet on his campaign account, ‘Stacey Abrams wants state government mask mandates for Georgians and their children. But it looks like they wouldn’t apply when she’s attending a photo op.’ Abrams, a former state legislator, narrowly lost to Kemp in Georgia’s 2018 gubernatorial race.”

The Hill pulled off the old trick of reporting the reaction instead of the actual news.

Its story began, “Georgia gubernatorial candidate Stacey Abrams (D) fired back at her likely Republican opponents following criticism over a photo of herself unmasked at a Georgia school event.”

Saying fired back made it appear as if she were ambushed. Indeed, the headline did not say she was maskless. Instead it read, “Abrams fires back at Perdue, Kemp over criticism of maskless photo.”

Yes, that photo really should put a mask on.

The Hill is framing the issue rather than telling the news.

The New York Post pointed out, Abrams is only the latest Democrat hypocrite to pose maskless while pushing masks.

It said, “Abrams, 48, joins many of her Democratic peers including California Gov. Gavin Newsom and San Francisco Mayor London Breed, who have been seen gallivanting indoors without masks despite supporting strict face-covering mandates.”

The Daily Mail reported today, “A Democratic representative who has urged people to continue to wear masks was caught without one when he visited a New York high school at the end of January — despite the state’s mandates that masks be worn at all times in public schools.

“Rep. Jamaal Bowman, a Democrat of New York, was pictured visiting New Rochelle High School on January 31, when he was visiting with high school students and discussing a recent murder within the community.

“In the picture, Bowman is grinning ear to ear, as students around him are wearing face masks in accordance with New York State’s mask mandate, which requires all students and staff to wear face coverings at all times except for designated ‘mask breaks’ and lunch time.”

The school requires everyone to mask.

The masks don’t work. If they did, Abrams, Bowman, Breed, Newsom and the rest would never leave home without one.

And if masks worked, the mass media would treat her like a pariah for not wearing one. Instead they defend her masks-for-you, not-for-me policy.

She must be fun to work for.

Cloth masks don’t stop a virus any more than throwing a virgin into a volcano would. It is all pandemic theater. Maskless Democrats laugh at the sheeple.