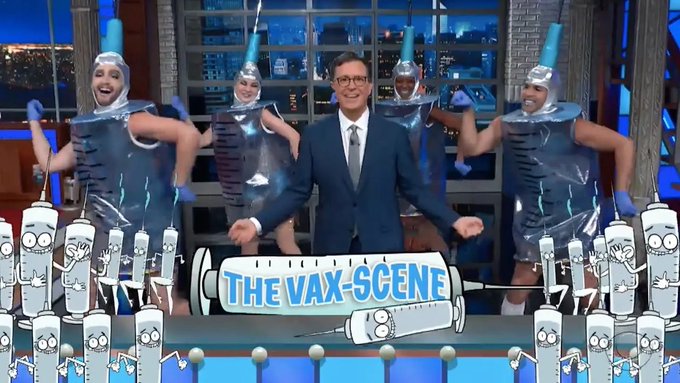 Saul Alinsky’s fifth Rule for Radicals is “Ridicule is man’s most potent weapon. There is no defense. It is almost impossible to counterattack ridicule. Also it infuriates the opposition, who then react to your advantage.”Which explains why corporate media has turned late-night TV shows into Marxist Theater. Mockery serves the powerful.

Last year, Stephen Colbert performed a Dancing Vaccines skit using the song Tequila but changing the words to Vaccine because all the cool kids are getting the shots. It was a bit he stole from Jay Leno’s Dancing Judge Itos.

This year, healthy athletes are dropping like flies following their covid shots. The media won’t report it because the media went all in on the covid shots, with their late-night hosts mocking skeptics who refused to take experimental drug.

Body builder Doug Brignole got knee-deep in the hoopla. He got the shot and said, “Those of you who think the vaccine kills people can use me as a test. If I die, you were right. If I don’t die, and have no ill effects, you were wrong, and should admit it (at least to yourselves). Better yet, you should admit that you were misled, and tell the world who misled you, so other people can benefit by avoiding those fear mongers.”

A year and a half later, he died. Maybe 63 is when fitness experts can expect to die. The cause of his death has not been revealed yet.

What has been revealed is that the covid shot is not a vaccine. This month, Pfizer acknowledged that its does not know if its shot stops the spread of covid. The skeptics were neither right nor wrong. The shots likely saved old people and people who have comorbidities. But requiring everyone in the world to be vaccinated against a disease that kills less than 1% of the infected is idiocy. Forcing people to take an experimental drug is a violation of the Geneva Conventions.

But the late-night hosts don’t care. They are under orders to promote vaccines.

Jimmy Kimmel told his viewers, “Dr. Fauci said if hospitals get any more crowded, they’re going to have to make some very tough choices about who gets an ICU bed.

“That choice doesn’t seem so tough to me. Vaccinated person having a heart attack? Yes, come right on in. We’ll take care of you. Unvaccinated guy who gobbled horse goo? Rest in peace, wheezy.”

It is interesting that every late-night host got covid — except Greg Gutfeld, the one guy who didn’t push vaccines.

Then there was the dismissal of ivermectin as horse goo. Ivermectin had success in stopping the spread of covid in India. The research is not conclusive but neither is the research on the vaccines, is it?

I got the shot because of my wife’s health issues. The shot saved the lives of the elderly and others, but most people did not need it. As I keep telling readers, you do you.

Before the late-night hosts were experts on covid, they were experts on wiretapping. In March 2017, they insisted that Obama did not use the FBI to spy on Donald Trump. (Spoiler alert: Obama did.)

Colbert said, “Trump adviser and stepmom who is trying to replace your mother Kellyanne Conway explained yesterday that just because there’s no evidence that his phone was wiretapped, doesn’t mean Trump is wrong.”

Trump wasn’t wrong because evidence came out later that the FBI lied and spied on Trump Tower on behalf of Obama. A president spying on the opposition is no big deal. Nixon could have used that information in 1974.

Two months later, Colbert in a monolog tried to speak directly to Trump, “Sir, you attract more skinheads than free Rogaine. You have more people marching against you than cancer. You talk like a sign language gorilla that got hit in the head. In fact, the only thing your mouth is good for is being Vladimir Putin’s cock holster.”

Colbert still clings to Russiagate like a baby hangs on to its blankie.

RT reported shortly after the election, “Host Stephen Colbert was almost universally praised by Donald Trump’s critics for an emotional monologue on the 2020 election. However, the heartfelt speech failed to impress many cynics on both sides of the US political divide.

“Colbert blasted Trump during The Late Show on Thursday for claiming that there were fraudulent votes cast for his opponent Democrat Joe Biden in the ongoing election. ‘For him to cast a dark shadow on our most sacred right from the briefing room in the White House — our house, not his — that is devastating,’ he said after apparently tearing up a bit.”

When Americans rely on clowns for information we wind up with a clown behind the Resolute desk.

We need laughter in our lives. Jimmy Kimmel and Colbert give us lectures, untruths and bad taste.

Johnny Carson used to worry that too many people got the news from his Tonight Show. He knew his role. He was a court jester. Johnny may have been liberal but he was more objective than Dan Rather, wasn’t he?

The late-night hosts now hope that people only get their news from them.

There is hope for our nation in Saul Alinsky’s seventh rule: “A tactic that drags on too long becomes a drag.”

Colbert and company now are bigger drags than RuPaul.