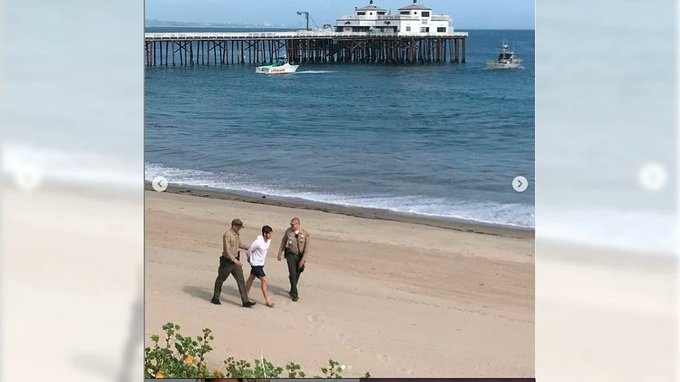 On April 2, 2020, Los Angeles County Fire Lifeguards chased down and arrested the lone surfer on a beach near Malibu.

The Washington Post reported, “SAN FRANCISCO — Thousands of gay men clad in leather, latex — and often much less — partied along Folsom Street here last weekend during the annual kink and fetish festival. Even after the city had just declared the monkeypox outbreak striking its gay community a health emergency — one day after the World Health Organization urged men to sleep with fewer men to reduce transmission — San Francisco public health officials made no attempt to rein in festivities or warn attendees to have less sex.

“Public health authorities typically emphasize safer sex over abstinence to prevent the spread of diseases through intimate contact. But monkeypox is presenting new challenges in calibrating the right message to stop the rare virus from becoming endemic while limiting government intrusion into the bedroom.”

It was OK for the government to intrude in our worship of the Lord and in every aspect of our lives without any proof that masks or social distancing work. Heck, the vaccines wear off quickly.

But getting gay men to stop having anonymous sex with multiple partners is verboten.

The story said, “Instead of shutting down Dore Alley, San Francisco officials focused on disseminating information about how the virus spreads to help people make their own choices. The San Francisco AIDS Foundation released a guide to a ‘filthy weekend — free of anxiety,’ encouraging people to attend while taking steps to reduce risk, including dressing head-to-toe in leather or latex to minimize skin-to-skin contact.

“But at the street festival itself, warnings about monkeypox were hard to find. Only one of the attendees interviewed said he received an informational pamphlet about the virus, even as organizers checked for proof of coronavirus vaccination.”

The plan for this outbreak of monkeypox is right out of the AIDS Playbook. Protect gay men from the “stigma” of the disease until it hits the mainstream and then proclaim.

There are some public health officials who still place the public’s health above woke politics.

The story said, “In New York City, a top epidemiologist at the health department has publicly criticized agency leadership for not urging men who have sex with men to abstain from anonymous sex for several weeks. Don Weiss, director of surveillance for the agency’s Bureau of Communicable Disease, also blasted the health department for issuing a news release in July advising people who choose to have sex while sick with monkeypox to avoid kissing and to cover their sores; Weiss said taking those steps do not prevent infected people from transmitting the virus.”

It would be for only 15 days so we can flatten the curve.