These may be the final days of Justin’s premiership. 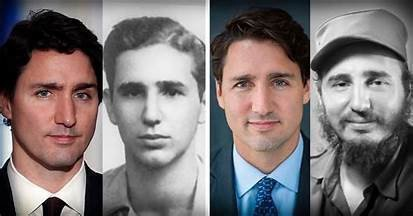 These may be the final days of Justin’s premiership. The Edmonton Journal reported, “The Maru poll, which was conducted from Feb. 9 to 10, found that only 16% of Canadians would vote for Trudeau based on his actions of the last two weeks.”
The Freedom Convoy’s protest is doing him in by exposing him as a pansy.
The Journal reported, “Although Canadians sympathize with the anti-mandate demands of Freedom Convoy, they increasingly hate the protests themselves. A new Maru Public Opinion poll found that 56% of Canadians don’t have an iota of sympathy for Freedom Convoy — and two thirds wouldn’t mind seeing their blockades cleared by military force.
“But Canadians are also turning their ire on a weak government response and an intransigent prime minister whom they blame for inflaming the situation.”
He’s almost as weak as Biden.
The Journal reported, “For the protest’s first weekend, Canadians didn’t even know where Trudeau was. In the days since, blockades in Ottawa, the Ambassador Bridge in Windsor, Ontario, and at border crossings in Alberta and Manitoba have been left in the hands of local law enforcement. Tellingly, it was Ontario Premier Doug Ford — not the federal government — who declared a state of emergency on Friday to counter blockades in Ottawa and Windsor.”
So why do I call him Justin Castreau? Well, his policies certainly warrant the epithet. He so far left that I expect Canada to replace all its cars with a fleet of 1956 Buicks powered by lawnmower engines.
But his lineage is in question.
Thursday will mark the fourth anniversary of AP posting, “No, Fidel Castro is not Canada PM Trudeau’s father.”
The story lives on for three reasons:

AP said, “The February 1, 2018, suicide of Castro’s oldest son, Fidelito, spurred the most recent report on several sites, claiming that Fidelito left a suicide note referring to Justin Trudeau as his half-brother. A theory that Castro was Trudeau’s father was also shared widely on social media after Castro’s death in 2016, when Trudeau caused an uproar over remarks praising the late Cuban leader.

“The Canadian government denied the reports this week. Justin Trudeau was born on Dec. 25, 1971, to the late Canadian Prime Minister Pierre Trudeau and his wife, Margaret.

“Trudeau was born a little more than nine months after the marriage of his parents and more than four years before Margaret made a much-publicized first trip to Cuba and met Fidel Castro. Margaret was 22 when she married the 51-year-old prime minister and was the subject of intense media scrutiny. Experts say it would have been impossible for an earlier visit to Cuba to go unnoticed.”

Castro was 7 years younger than the prime minister.

AP ignored Justin’s mourning of Castro, which was embarrassing. Justin’s official statement said, “It is with deep sorrow that I learned today of the death of Cuba’s longest serving President.

“Fidel Castro was a larger than life leader who served his people for almost half a century. A legendary revolutionary and orator, Mr. Castro made significant improvements to the education and healthcare of his island nation.

“While a controversial figure, both Mr. Castro’s supporters and detractors recognized his tremendous dedication and love for the Cuban people who had a deep and lasting affection for el Comandante.

“I know my father was very proud to call him a friend and I had the opportunity to meet Fidel when my father passed away. It was also a real honour to meet his three sons and his brother President Raúl Castro during my recent visit to Cuba.

“On behalf of all Canadians, Sophie and I offer our deepest condolences to the family, friends and many, many supporters of Mr. Castro. We join the people of Cuba today in mourning the loss of this remarkable leader.”

Kurt Schlichter tweeted, “With his innovative urban renewal program, Pol Pot bravely confronted the pressing challenge of overpopulation.”Ian Miles Cheong tweeted, “We mourn Freddy Krueger, who made dreams into reality, whose moral compass was guided by his love of the younger generation.”

I don’t know if he is Castro’s son or not.

But Pierre and Fidel were BFF.

The Guardian recalled, “Fidel Castro was an honorary pall bearer at the 2000 funeral of Trudeau’s father, former prime minister Pierre Trudeau. In 1976, the senior Trudeau became the first NATO leader to visit Cuba under Castro’s rule, at one point exhorting ‘Viva Castro!'”

Given that Justin may soon lose his gig as prime minister, I would say he is Trudeau’s son because I doubt Castro’s genes would have produced such a weakling.