Time to dump clueless Obama,Comment from the past. 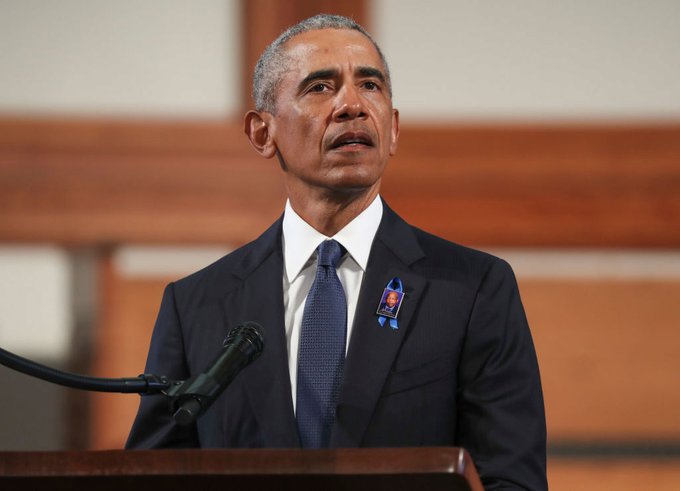 Throughout 2021, the narrative from DC reporters and pundits has been that Republicans must distance themselves from President Trump. Republicans largely ignored this advice for 75 million reasons. That’s how many people voted for him in 2020. No Republican ever came close to that figure, which was a gain of 13 million from the 62 million votes he received in 2016. After Tuesday’s election, we now know that the Republican strategy of staying on The Donald’s good side worked. He was 4-0 in races he endorsed. He campaigned little but he raised money and occasionally a little heck on the Internet.

Meanwhile, Democrats trotted out Obama in Virginia. His job was to gin up the black vote. It helped cost Democrats the race.

Obama is out of touch. Never one to bother with details, he failed to do his homework. He dismissed parental concerns about schools, telling supporters, “We don’t have time to be wasted on these phony trumped-up culture wars, this fake outrage, the right-wing media peddles to juice their ratings.”

For a fellow with jug ears, he sure is tone deaf.

He kicked to the curb suburban DC voters.

In the wake of a 12-point flip in Virginia, Yascha Mounk wrote in The Atlantic, “You Can’t Win Elections by Telling Voters Their Concerns Are Imaginary.”

Mounk dared to say that yes, critical race theory, is being used in government schools.

He wrote, “Few middle or high schoolers are poring over academic articles written by Richard Delgado or Kimberlé Crenshaw. But across the nation, many teachers have, over the past years, begun to adopt a pedagogical program that owes its inspiration to ideas that are very fashionable on the academic left, and that go well beyond telling students about America’s copious historical sins.

“In some elementary and middle schools, students are now being asked to place themselves on a scale of privilege based on such attributes as their skin color. History lessons in some high schools teach that racism is not just a persistent reality but the defining feature of America. And some school systems have even embraced ideas that spread pernicious prejudices about nonwhite people, as when a presentation to principals of New York City public schools denounced virtues such as perfectionism or the worship of the written word as elements of white-supremacy culture.”

I call it trickle-down communism.

Obama of course saw CRT in college 30 years ago. Heck, I saw it there 40 years ago. Unlike him, I saw it move downstream. He’s still stuck in the ’90s when CRT was for college students only.

As I say, he is clueless. He now is stuck in a celebrity bubble that occasionally overlaps with the political bubble he once ran.

The media is largely inside that bubble as well. In it post-election piece, the New York Times put parental rights in air quotes. Transgenders can have rights. Illegal aliens can have rights. But parents cannot.

The Times said, “In Virginia, where Republicans made schools central to their pitch, education rocketed to the top of voter concerns in the final weeks of the race, narrowly edging out the economy.

“The message worked on two frequencies. Pushing a mantra of greater parental control, Glenn Youngkin, the Republican candidate for governor in Virginia, stoked the resentment and fear of some white voters, who were alarmed by efforts to teach a more critical history of racism in America. He attacked critical race theory, a graduate school framework that has become a loose shorthand for a contentious debate on how to address race. And he released an ad that was a throwback to the days of banning books, highlighting objections by a white mother and her high-school-age son to ‘Beloved,’ the canonical novel about slavery by the Black Nobel laureate Toni Morrison.”

Not mentioned was the Fairfax, Virginia, mother who read to the school board passages in “Lawn Boy” by Jonathan Evison and “Gender Queer: A Memoir” by Maia Kobabe, which were available at the Fairfax High School library.

Fox reported, “School board members interrupted the mother, with one telling her, ‘There are children in the audience here.'”

Which was exactly her point.

The objections are not imaginary and are not racist.

But I encourage the Times to continue to tell its readers this because I really do not want Democrats to win another election.

In his piece in The Atlantic, Mounk said Democrats have two options now.

He wrote, “They could defend the need to teach students ideas that are rooted in critical race theory, arguing that an unrelentingly bleak view of American history or a depiction of contemporary America as still defined by omnipresent forms of structural racism are accurate reflections of reality.

He also wrote, “Alternatively, Democrats could become more willing to disavow curricular content that is incendiary or misguided. Exercises that ask elementary-school students to rate themselves on a scale of privilege or presentations that imply that black people are somehow less interested in the written word may be relatively rare. But voters who worry about them are much more likely to be reassured by politicians who are willing to condemn them than by those who pretend they don’t exist. Doing so is both right and expedient.”

There is a third option for Democrats.

He does not know what he is talking about. He just helped tick off enough parents in Northern Virginia to elect a Republican governor. They need not have voted for him. All they had to do was stay home.

Mounk ended his piece, “For anybody who cares about making sure that Donald Trump does not become the 47th president of the United States, it is crucial that Democrats avoid repeating the mistakes that just put a Republican in Virginia’s governor’s mansion. It is impossible to win elections by telling voters that their concerns are imaginary. If Democrats keep doing so, they will keep losing.”

How true, how true.

But Mounk did not mention the real roadblock for Democrats. Obama’s name did not appear once in the article.