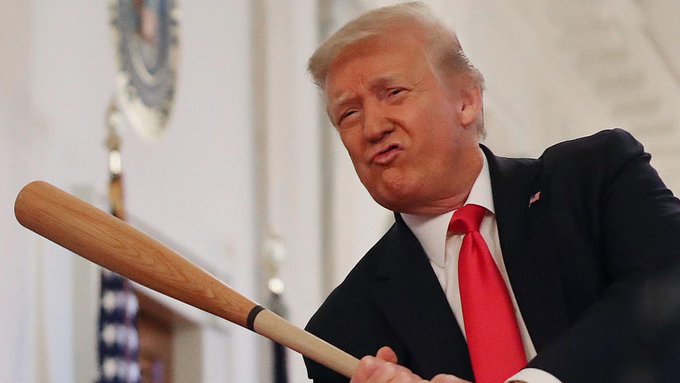 The Washington Post version of the story was polite, “Trump lawyers suggest seized Mar-a-Lago documents may not be classified.”Trump’s lawyers weren’t polite. None of the records were classified as President Trump de-classified any and all material he sent home, as presidents do before they leave office.

They pointed out that in de-classifying his records, President Trump was only following an order Obama wrote. The WaPo story did not mention Obama.

The story said, “Lawyers for former president Donald Trump filed court papers Monday arguing against any pause in a judge’s order for a special master to review documents seized at Mar-a-Lago last month, suggesting that some of the documents marked classified may not be, and that Trump may have the right to keep the materials in his possession.”

It claims only 100 are classified. That’s only 1% of what they took. They took nearly 17 times as many newspapers, magazines and clippings — 1,693 in all.

His lawyers in a motion took the Biden regime to task over its Raid on Mar-a-Lago.

There was no pussy-footing around as the 21-page filing began:

This investigation of the 45th President of the United States is both unprecedented and misguided. In what at its core is a document storage dispute that has spiraled out of control, the Government wrongfully seeks to criminalize the possession by the 45th President of his own Presidential and personal records.

The new director of the National Archive wants his personal records and sent in the FBI to confiscate them. The bureaucracy always wants everything as it competes with presidential libraries for the paperwork.

Biden’s FBI bureaucrats want to be able to sift through the stuff it took — which may include the former first lady’s underwear but definitely does NOT include any nuclear codes.

The Government generally points to the alleged urgent need to conduct a risk assessment of possible unauthorized disclosure of purported “classified records.” But there is no indication any purported “classified records” were disclosed to anyone. Indeed, it appears such “classified records,” along with the other seized materials, were principally located in storage boxes in a locked room at Mar-a-Lago, a secure, controlled access compound utilized regularly to conduct the official business of the United States during the Trump Presidency, which to this day is monitored by the United States Secret Service.

In their footnotes, the lawyers said:

Trump’s lawyers want a special master to review the documents to determine which ones belong to the government and which belong to the president. Both sides have agreed on one but the Biden regime wants to continue reading the stuff even though it may be stuff that belongs to President Trump and should not be read by Biden and his goons.

First, the Government’s position incorrectly presumes the outcome—that its separation of these documents is inviolable and not subject to question by this Court or anyone else. Second, the Government’s stance assumes that if a document has a classification marking, it remains classified irrespective of any actions taken during President Trump’s term in office. Third, as noted above, the Government continues to ignore the significance of the PRA. Indeed, if any seized documents (including any purported “classified records”) are Presidential records, President Trump (or his designee, including a neutral designee such as a special master) has an absolute right of access to same under the PRA. 44 U.S.C. § 2205(3). Accordingly, President Trump (and, by extension, a requested special master) cannot be denied access to those documents.

Among the items confiscated were his passports. What possible security breaches could his passports hold? His picture?

Which brings us to Obama. The lawyers said:

Of course, classified or declassified, the documents remain either Presidential records or personal records under the PRA.

The Presidential Records Act is the guide here. The lawyers said:

Pursuant to the PRA, a former President has an unfettered right of access to his Presidential records even though he may not “own” them. See 44 U.S.C. § 2205(3).

Thus, contrary to the premise behind the Government’s “criminal” investigation, the determination of whether a former President timely provided documents to the National Archives and Records Administration is a civil matter governed by the PRA. All government records (classified or otherwise) fall into two basic categories, either under the PRA or the Federal Records Act (“FRA”).

If they are FRA, the National Archive (NARA) can have them.

If they are PRA, President Trump (or any president) can have them.

This is not about national security. This is about deep state insecurity. The FBI and Biden want to know what goods the president has on them.

While the discovery of classified material in files containing Presidential records should not have been at all surprising, NARA allegedly became concerned about national security interests within weeks of the turnover by President Trump of fifteen boxes of records. Yet no notification was provided to Congress at that time. Moreover, rather than adhering to the PRA, NARA made an immediate criminal referral. Given the circumstances involve the possession by a former President of his own Presidential records at a location which had long been utilized to conduct the business of the United States, the pursuit of all other available civil mechanisms would, respectfully, have been a better exercise of prudential judgment.

The Biden regime will go after his lawyers because the regime has gone after his other lawyers and anyone else associated with him.

The lawyers stay true to him and the law because they want the restoration of our constitutional republic. They said:

Given the significance of this investigation, the Court recognizes, as does President Trump, that it must be conducted in the public view. The Court has correctly directed commencement of a process which certainly benefits the Government, President Trump and the people of the United States. The Plaintiff respectfully submits any stay of the injunction or limitation on the scope of review only erodes public trust and the perception of fairness.

Some people say if they can do it to Trump, they can do it to anyone, but we know better. The FBI has been judge shopping for warrants that they execute by seizing anything they want, making sure to leave a mess behind.

Perhaps Trump’s lawyers will bring a halt to this King George III trampling of our rights.