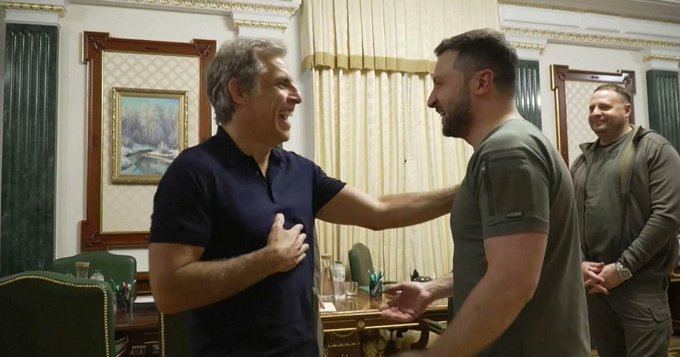 Easily the funniest skit on Saturday Night Live was Steve Martin goofing on the King Tut exhibition in New York in a song on April 28, 1978. Martin was fearlessly stupid. One line stuck out.

He gave his life for tourism.I thought of that today as I read Douglas Murray’s column today in the New York Post. The first part was about Liz Truss and I may get to that in a later post.

The second part began, “The President of the American Federation of Teachers, Randi Weingarten has been touring Ukraine. Why? Well apparently to discover such insightful facts as this: that the Ukrainian people are ‘in a fight for freedom.'”

Murray dared to ask, “Why does Weingarten need to tour Ukraine´s schools? Why doesn´t she spend more time in America´s schools? Perhaps it´s because if she did she might be reminded of what a rotten job she has done in her job.

“This is the woman who ensured American pupils lost years of education during Covid. While she went on about protecting teachers from the virus she seemed to forget about America´s students completely.  Not the least of the consequences of that is that the poorest children in America will be behind for the rest of their educations. Indeed for the rest of their lives.”

But the AFT is to education what French fries are to France.

Weingarten is a political celebrity because her union raises money and provides volunteers who elect the Fettermans and Bidens who are ruining the country.

Other celebrities who visited Ukraine to show their support include Angelina Jolie and Ben Stiller. Commander-in-Chief Zelensky somehow has the time to pose for grip-and-grin photos with the stars. It promotes his main goal: getting billions in aid from NATO countries. Some of the money he kicks back to the politicians who are emptying their nations’ treasuries in the name of freedom.

Ukraine is a grifter state and Zelensky has no shame.

Early in 2020 — before the war — his government declared, “Zelenskyy Moves to Boost Tourism and Travel to Ukraine.”

(I don’t understand the need for an extra Y. May it is for the same reason Jann Wenner added the extra N to his first name: to look cool.)

The press release said, “The most popular non-conventional travel destination in Ukraine is the Chernobyl Exclusion Zone, site of the 1986 nuclear power plant disaster.  Chornobyl is likely to attract even more visitors in the future thanks to this year’s critically acclaimed HBO television mini-series about the catastrophe. In July, President Zelenskyy issued a decree on the development of the zone.”

There is something ghoulish about visiting a site where a government-run nuclear reactor killed 60 people, displaced tens of thousands more and created the largest no-go zone in the world.

Putin’s invasion of Ukraine is unacceptable. Zelensky’s refusal to seek peace and end the carnage is just as bad.

I want to see on the tombstone of every man killed in this war this epitaph: He gave his life for tourism.

Please subscribe to my Substack account. It is free. There is no paywall so you can go there any time. (I plan to post a weekly column at noon Eastern on Saturdays.) But please sign up anyway.