You Raided the wrong President 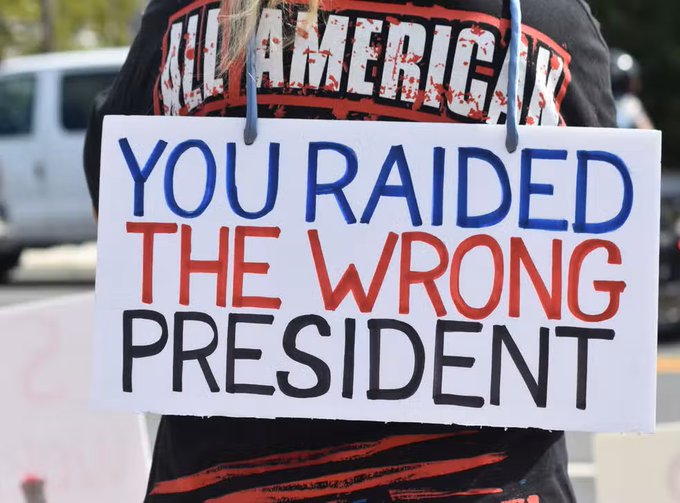 How terribly wrong did the FBI raid on Mar-a-Lago go? Politico now blames Donald Trump for the FBI seizing and confiscating 15 bins of documents from his home — including his passports. The seizure of the passports without a court order is a violation of his rights as a citizen.

The whole thing is an abomination. The media blames the victim.

But Trump did not search for a daggone thing. The FBI did with a warrant from a Democrat magistrate.

She had no business “unmasking” a presidential candidate’s so-in-law and a top adviser. An FBI that sat on laptop’s worth evidence of corruption, drug abuse and pornography without doing a dang thig about Hunter Biden.

The FBI also ignored the evidence of national security violations by Hillary in 2016 even as it used national security excuse to spy on Trump. That Republican leaders Paul Ryan and Mitch McConnell saw nothing wrong with this should make them co-defendants in the RICO lawsuit.

Trump however is wise enough not to take legal advice from a non-lawyer.

A change of House leadership and a successful first term by Trump have changed that. The FBI will not get away with raiding Mar-a-Lago.

That reauthorization of Section 702 is in trouble. Democrats don’t have the votes in Congress to ram it through by year’s end and likely won’t have the votes next year. They need Republicans to sell out their country in order for Democrats to continue to use the FBI to spy, raid and otherwise abuse Americans.

Democrats are losing their best useful idiot after Tuesday’s primary in Wyoming.

Politico said, “Greenlighting future Section 702 surveillance was never going to be easy in a GOP with long-running fractures over the often-sweeping scope of law enforcement and intelligence monitoring, as illustrated by brawls on the matter in 2018 and 2020. While Congress has until the end of 2023 to act on a program that the FBI and others have argued is critical to national security, House Republicans said in interviews that they’ve already started talking about it as they prepare for a likely majority next year.”

Spying on Trump had consequences.

Politico said, “Four years ago, when Congress last reauthorized Section 702 — a piece of the bigger Foreign Intelligence Surveillance Act — it sparked an unusual opposition effort that married members of the House Freedom Caucus with privacy-minded Democrats.

“The law ultimately got reauthorized, but only after last-minute chaos as then-President Trump first appeared to link it to ‘spying’ on his campaign heading into the 2016 election before backpedaling and tweeting that the program was needed to go after ‘bad guys.'”

Scary quote marks around spying don’t make the spying on Trump anything less than spying on Trump by the FBI. Unfortunately, it appeared to be a price paid for national security.

The FBI viewed the compromise as getting away with it.

Their actions united Republicans. Instead of sacrificing a little privacy for national security we should sacrifice a little national security for privacy. How did Benjamin Franklin put it? Oh yes, “Those who would give up essential Liberty, to purchase a little temporary Safety, deserve neither Liberty nor Safety.”